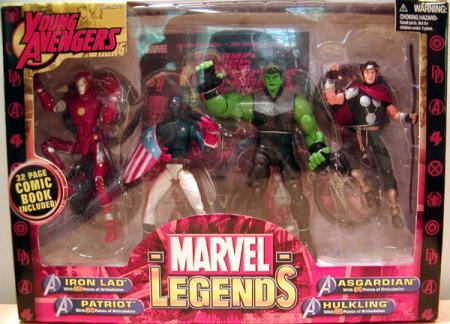 Whan a 30th century teenager discovers he is destined to become the time-traveling despot known as Kang The Conqueror, he travels back to the 21st century to enlist the aid of Kang's greatest adversaries, The Avengers.

Young Kang arrives in the present only to learn that the Avengers have officially disbanded. With nowhere to turn, he uses his futuristic armor to break into Stark Industries where he downloads the programming and data files of the decommissioned android Avenger The Vision into his CPU.

Discovering a failsafe program in the Vision software designed to pinpoint the exact locations of the next wave of Avengers, young Kang puts together a new team of super-powered teens, who, in an homage to the original Avengers, present themselves as the would-be teen side-kicks of Captain America, Iron Man, Thor, and the Hulk. Patriot, Iron Lad, Asgardian, and Hulkling are dubbed "The Young Avengers" by the press!