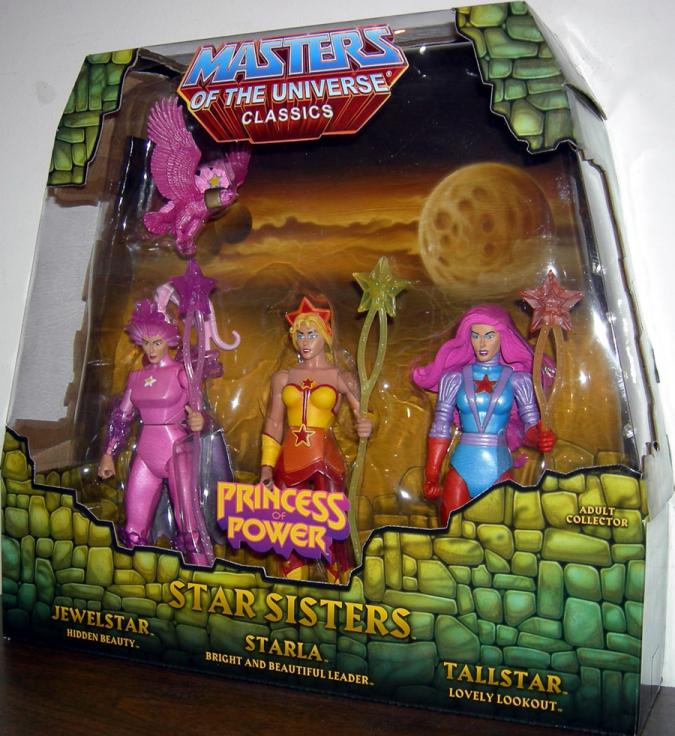 Our inaugural MOTUC 3-pack shines brightly with what would have been the final three Princess of Power figures originally planned as part of the 1987 line, the Star Sisters! Sculpted by the Four Horsemen, all three feature their famously glittery Star Wands. Tallstar also has an interchangeable limb and neck piece to ""re-create"" what would have been her classic action feature (super stretching limbs), Jewelstar arrives with a clear jewel arm and leg armor (non-removable), and Starla comes with her pet Glorybird, a perch and removable bird armor. Fun Fact: Although the set never made it to retail, prototypes were shown in a vintage Mattel catalog.

In ancient times, an evil sorceress became jealous of the Star Sisters' youth and beauty and trapped them in a shooting star. It was sent hurling through the cosmos until the three women crash-landed on Etheria. There, they remained magically confined in the side of a mountain until the day Swiftwind's hooves accidently loosened the stone that concealed their prison. She-Ra quickly used her powers to melt away the star that held them captive. In gratitude, the sisters pledged their everlasting friendship. Jewelstar magically conjures gem armor to protect herself and others. Tallstar uses her magic to stretch to unbelievable lengths. Starla, with her pet Glorybird, can sense danger and project spells of light against her foes. Together, they stand side-by-side with She-Ra in the battle for freedom.