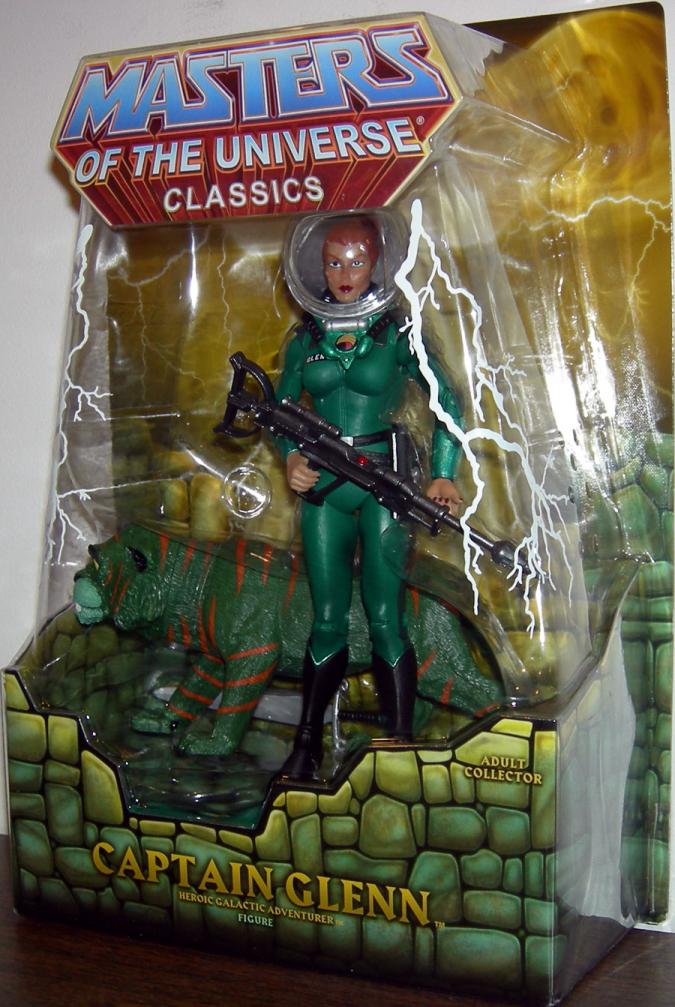 Fresh from the battle field, Captain Glenn arrives armed with her rifle and blaster pistol. She's not arriving empty handed the good Captain includes her royal green dress, scepter and sword, plus an interchangeable head, to transform her into Queen Marlena! And as an added accessory, she includes Cringer, Prince Adam's loyal pet and secret identity of Battle Cat.

This figure was available as Queen Marlena at 2011 San Diego Comic-Con. Each pack comes with all the parts you need for both figures, but each includes a unique bio specific to how it is packed.

Before she was Queen of Eternia, Marlena Glenn was a heroic explorer and space captain from Planet Earth. Along with her courageous crew, she traveled the stars in search of new sources of fuel for her homeworld. A crack shot with almost any laser rifle, she prefers a Higuchi 1114 model for its speed and accuracy. On many adventures, she learned to rely on not only her strength and courage but her intellect as well. After completing her assignment with Project Photog, Marlena volunteered to pilot an experimental Warp Ship through a black hole. Arriving in the center of her dimension, she became the first Earthling to make contact with the magical planet of Eternia. Late in life, she used the power of the Cosmic Key to return to her homeworld, discovering a great secret that linked the two planets she called home!