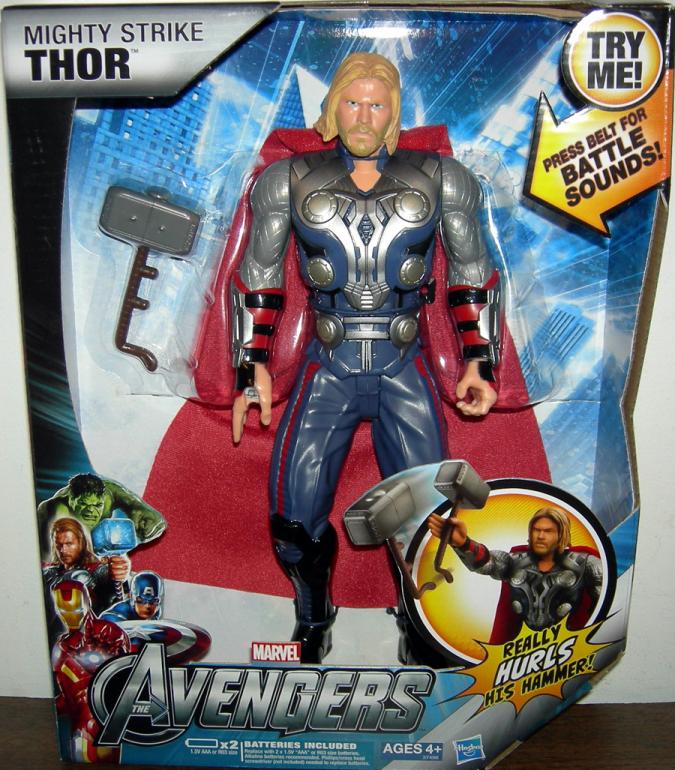 The mighty THOR has come to Earth to face down any evil that threatens humanity. Every blow of his mighty hammer shatters the air like thunder. When he calls down the fury of the storms that are his to command, no enemy can stand against him. With the other AVENGERS by his side, he is absolutely unbeatable.

Recruit THOR to your super team! He's the Asgardian lord of the storm, with total control over the thunder, the lightning, and the wind! THOR is a noble warrior devoted to the defense of both his legendary home and Earth. Now you can imagine yourself riding the storm alongside the Lord of Thunder! You can make THOR throw his hammer with an easy pull of the arm, and his incredible battle action is paired with awesome phrases and combat sounds. With your THOR figure by your side, you can imagine you're unstoppable!

THOR summons the lightning to strike down his enemies! This big figure brings electronic heroism to your world. THOR is ready to charge into action against the most powerful villains in the cosmos. You can imagine that you're a member of the mighty AVENGERS, with THOR flying above you, raining destruction down upon your enemies. With cool combat sounds and real THOR phrases, plus a mighty hammer-hurling attack, he's the world's mightiest Avenger! Join up with THOR and battle the bad guys to a standstill!

Electronic sounds, phrases, and a mighty hammer-hurling attack! A single press of a button activates cool battle sounds and awesome THOR phrases. And all you need to do to hurl his hammer into action is pull back on his arm and release! Get ready to battle cosmic evil with THOR!